Source: Henry Vizetelly, Christmas With The Poets (London: David Bogue, 1851), who notes that this carol is found among the Additional MSS at the British Library, No. 5665, fol 6. vo.

1. I am here, Sir Christmas
Welcome, my lord Sir Christmas,
Welcome to all both more and less;1
Come near Nowel.

2. God be with you, Sir, tidings I you bring,
A maid hath born a child full young,
The which causeth me to sing.
Nowel.

3. Christ is now born of a pure maid,
In an ox stall he is laid,
Wherefore sing we all at abraid,2
Nowel.

4. Drink you all right heartily,
Make good cheer and be right merry,
And sing with us now joyfully,
Nowel.

1. I am here Syre c'st masse.
Wellcome cristesmasse well,
Come to us all both more & lasse
com neje nowell.

2. Criste is now born of a pure mayde
In an oxe stalle he is layde
Where for syng we all atte abrayde, Nowell.

Words and Music also found in:

2., Christ is now born of a pure maid:
In an ox-stall he is laid;
Wherefore sing we all at-a-braid: Nowell.

"an ancient MS. in the British Museum furnishes the following Carol, which, in olden times, would appear to have been the initiatory welcome to the festivities of the season. The religious allusions, intermixed with invitations to partake of the good things of this life, mark the age of hearty hospitality and honest enjoyment,—before Puritanism came into fashion."

Note: By an act of Parliament in 1972, the collection of manuscripts and printed books in the British Museum were separated and transferred to the newly-established British Library. The British Library is now located in the St. Pancras area (96 Euston Road, bounded by Ossulston Street and Midland Road, and near the St Pancras International Station and the King's Cross Station). Ritson donated the manuscript to the British Museum on August 7, 1795. It is now designated as "Additional Manuscript 5665." For a description, including a table of contents, see this description of Add 5665 at the Digital Image Archive of Medieval Music. See also a listing of carols in The Digital Index of Middle English Verse.

The carol is attributed to Rev. Richard Smart (or Smert or Smerte), Rector (1435-1477) of Plymtree, Devon, and vicar-choral at Exeter Cathedral (1428-ca. 1466). The Selden manuscript contains several other carols by Rev. Smart, notably one of the Boar's Head carols (“The Borys Hede That We Bryng Here,” which was also first published by Ritson).

Although Ritson's manuscript contained the music, Ritson himself did not reproduce it. See: I Am Here, Syre Crystes Mass. Ritson didn't think much of this carol. He noted:

This, and the [preceding] ancient Christmas Carol [The Borys Hede That We Bryng Here] are given, merely as curiosities, from the editors folio MS., where each is accompanied with a musical composition for three voices; but which, neither in point of merit nor antiquity, seems to deserve a place in this work.

Nowel, Nowel (the old French name for Christmas), and a great cry at that period, was the usual burden to this sort of thing. Many instances of which may be found in No. 2593. Bib. Sloan.

It was likewise the name of this sort of composition, which is equally ancient and popular. Books of carols were cried about the streets of Paris in the thirteenth century. "Noel, noel, à moult grant cris."

In Ritson's version, the second and fourth verses contain phrases in French:

In the version given by Mr. Sandys, the lyrics are slightly different. See: I Am Here, Syre Christmasse. The Rev. Richard R. Terry, in his A Medieval Carol Book, p. 59, gives us these translations:

Concerning the inclusion of French phrases into this carol, William Henry Husk observed:

... this may perhaps point to the period at which Henry met Francis I on the celebrated “Field of the Cloth of Gold,” as that of its production. The music, in three parts (soprano, alto, and tenor), which accompanies the carol in the manuscript, will be found in John Stafford Smith's “Musica Antiqua,” i. 26.

This very old carol is one of a number of carols, mummers' plays, or texts featuring a personification of Christmas, and, in this one, we have a ceremony welcoming “Sir Christmas” into the season. Whether or not it was ever actually used in a ceremony is unknown, but it certainly could have been incorporated into such a ceremony. See: Chambers, The Medieval Stage, Vol. I, p. 216.

Another very early carol shares this personification, although with a greater emphasis on the Nativity, Good Day, Sire Cristemas Our Kinge:

Good day, sire Cristemas our kinge,
For every man bothe olde and yinge
Is glad and blithe of youre cominge.
Good day !

This note from Oxford Dictionary of English Folklore's entry for Father Christmas gives a good explanation of this carol:

The earliest evidence for a personified ‘Christmas’ is a carol attributed to Richard Smart, Rector of Plymtree (Devon) from 1435 to 1477 (Dearmer and Williams, Oxford Book of Carols (1928), no. 21, 41-3); it is a sung dialogue between someone representing ‘Sir Christmas’ and a group who welcome him, in a way suggestive of a visiting custom:

‘I am here, Sir Christmas.’
‘Welcome, my lord Sir Christmas,
Welcome to us all, both more and less,
Come near, Nowell!’

Sir Christmas then gives news of Christ's birth, and urges his hearers to drink:

There have been numerous other personifications of Yule, Father Christmas, St. Nicholas, and Santa Claus. In Roman times, and in England up to the reign of King Henry VIII. there was a 'Lord of Misrule' who presided over the festivities during the Winter Solstice or Christmas-tide; he was also known as the 'Christmas Lord' or 'Prince Christmas.' The English colleges and Inns of Court frequently had such characters. In 1607, the Christmas Prince at St. John's College, Oxford, was entertained with the carol The Boare Is Dead. W. Carew Hazlitt, in his new edition of "The Popular Antiquities of Great Britain" (1905) gave us good descriptions of the Lord Of Misrule and the Christmas Prince of those times.

Ben Jonson's play 'Christmas, His Masque' (1616) featured a Father Christmas character, together with his sons and daughters whose names were Mis-Rule, Caroll, Minc'd-Pie, Gamboll, Post and Paire, New-Years-Gift, Mumming, Wassall, Offering, and Babie-Cocke. His opening remark reflects the struggle against the Puritans who would ban Christmas itself in England in the early 1600s:

Why Gentlemen, doe you know what you doe? ha!
would you ha'kept me out? Christmas, old Christmas?
Christmas of London, and Captaine Christmas?
Pray you let me be brought before my
Lord Chamberlaine, i'le not be answer'd else:
'tis merrie in hall when beards wag all: I ha'seene
the time you ha'wish'd for me, for a merry Christmas,
and now you ha'me; they would not let me in

Other examples during this time include a work titled 'An Hue and Cry after Christmas' (1645) and THE EXAMINATION AND Tryal of Old Father Christmas by Josiah King (1658). In the latter, "the grave old Gentleman Christmas" exclaims:

Ah good my Lord! I have been grosly abused, & had been troden under foot had not these good Country people helpt me.

Moments later, the indictment of the grave old gentlemen was read:

Christmas thou art here indited by the name of Christmas, of the Town of Superstition, in the County of Idolatry, and that thou hast from time to time, abused the people of this Common-wealth, drawing and inticing them to Drunkenness, gluttony, & unlawful Gaming, Wantonness, Uncleanness, Lasciviousness, Cursing, Swearing, abuse of the Creatures, some to one Vice, and some to another; all to Idleness: what sayest thou to thy Inditement, guilty, or not guilty? He answered, not guilty, and so put himself to the Trial.

Other examples of personification in the Carols of Christmas include these songs:

All you that to feasting and mirth are inclin'd,
Come here is good news for to pleasure your mind,
Old Christmas is come for to keep open house,
He scorns to be guilty of starving a mouse:
Then come, boys, and welcome for diet the chief,
Plum-pudding, goose, capon, minc'd pies, and roast-beef.

Christmas hath made an end,
Well-a-day! well-a-day!
Which was my dearest friend,
More is the pity!
For with an heavy heart
Must I from thee depart,
To follow plow and cart
All the year after.

Farwell, Crystmas gayer and fre!
Farwell, Newers Day with the!
Farwell, the holy Epyphane!
And to Mary now syng we:

In the 19th century, William Sandys, a London barrister and antiquary, whose roots were in Cornwall, would include the Christmas Play of Saint George in his influential 1833 work, Christmas Carols Ancient and Modern. Near the very beginning of the play Father Christmas enters and says:

There are numerous examples of these popular plays, including 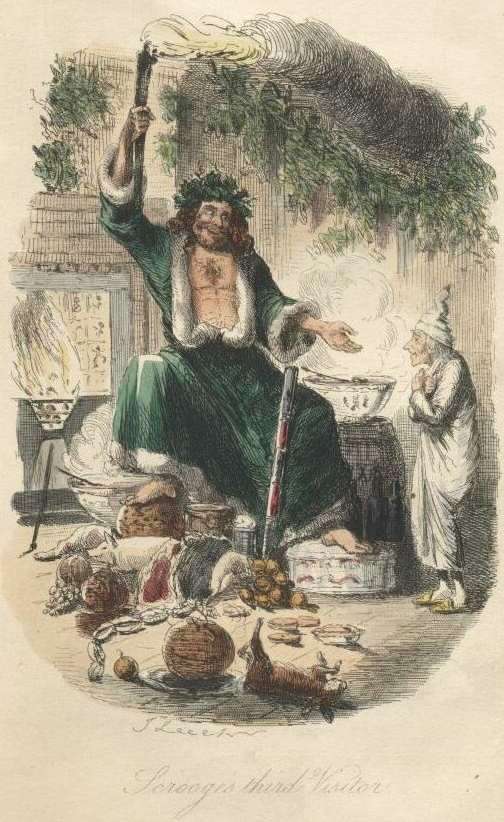 In Victorian times, the Father Christmas character would take on a variety of descriptions and garbs, one of the most memorable being the "Christmas Present" ghost in Dickens' A Christmas Carol (Left: "Christmas Present, by John Leech, Illustrator, 1843).

The Dutch St. Nicholas (Sint Herr Nikolaas, later Sinter Klass or Sinterklaas) became the American Sancte Claus or Santa Claus in Washington Irving's A History of New York from the Beginning of the World to the End of the Dutch Dynasty, — published on December 6, 1809, the feast day of St. Nicholas — with vivid word pictures. See: The Father of Santa Claus: Washington Irving.

Illustrations in the mid-1800s, by artists such as Thomas Nast, showed Santa as him tall, short, skinny, rotund, dressed in brown, blue, green, or red, often carrying a Christmas Tree (it was customary to put up the tree on Christmas Eve), with a pipe or a wassail bowl or a holly crown or a bag of toys, astride a horse, being pulled in a one-horse open sleigh, astride a single reindeer, or in an open sleigh pulled by a team of reindeer. By the late Victorian times, he was even seen on both a motorcycle and in an automobile!

Later, the paintings by Norman Rockwell gave us an elfin, saintly Santa (among others), and finally, Haddon Sundblom gave us Santa standardized as about 6' tall, with red trousers and suspenders, white shirt, and red and white coat, as seen in the Coca-Cola® advertisements from 1931 through 1964.

Over the centuries, Christmas the Holiday has been personified in a number of garbs, for a number of reasons, surviving even the rigorous opposition of the Puritans (who also opposed Christmas the Holy Day). Deeply ingrained in the culture, such personifications will most certainly continue into the future.

The Digital Index of Middle English Verse has a lengthy list of the reprintings of this carol: DIMEV 1128.

Versions on this site include: