Drive The Cold Winter Away

Also found in an early 17th century Broadside: All Hail to the Days, ca. 1625 (also see below)

1. All hail to the days that merit more praise
Than all the rest of the year,
And welcome the nights that double delights
As well for the poor as the peer!
Good fortune attend each merry man's friend,
That doth but the best that he may;
Forgetting old wrongs, with carols and songs,
To drive the cold winter away.

2. Let Misery pack, with a whip at his back,
To the deep Tantalian flood;
In Lethe profound let envy be drown'd,
That pines at another man's good;
Let Sorrow's expense be banded from hence,
All payments have greater delay,
We'll spend the long nights in cheerful delights
To drive the cold winter away.

3. 'Tis ill for a mind to anger inclined
To think of small injuries now;
If wrath be to seek do not lend her thy cheek
Nor let her inhabit thy brow.
Cross out of thy books malevolent looks,
Both beauty and youth's decay,
And wholly consort with mirth and with sport
To drive the cold winter away.

4. The court in all state now opens her gate
And gives a free welcome to most;
The city likewise, tho' somewhat precise,
Doth willingly part with her roast:
But yet by report from city and court
The country will e'er gain the day;
More liquor is spent and with better content
To drive the cold winter away.

5. Our good gentry there for costs do not spare,
The yeomanry fast not till Lent;1
The farmers and such think nothing too much,
If they keep but to pay for their rent.
The poorest of all now do merrily call,
When at a fit place they can stay,
For a song or a tale or a cup of good ale
To drive the cold winter away.

6. Thus none will allow of solitude now
But merrily greets the time,
To make it appear of all the whole year
That this is accounted the prime:
December is seen apparel's in green,
And January fresh as May
Comes dancing along with a cup and a song
To drive the cold winter away.

7. This time of the year is spent in good cheer,
And neighbours together do meet
To sit by the fire, with friendly desire,
Each other in love to greet;
Old grudges forgot are put in the pot,
All sorrows aside they lay;
The old and the young doth carol this song
To drive the cold winter away.

8. Sisley and Nanny, more jocund than any,
As blithe as the month of June,
Do carol and sing like birds of the spring,
No nightingale sweeter in tune;
To bring in content, when summer is spend,
In pleasant delight and play,
With mirth and good cheer to end the whole year,
And drive the cold winter away.

9. The shepherd, the swain do highly disdain
To waste out their time in care,
And Clim of the Clough2 hath plenty enough
If he but a penny can spare
To spend at the night, in joy and delight,
Now after his labour all day;
For better than lands is the help of his hands
To drive the cold winter away.

10. To mask and to mum kind neighbours will come
With wassails of nut-brown ale,
To drink and carouse to all in the house
As merry as bucks in the dale;
Where cake, bread, and cheese is brought for your fees
To make you the longer stay;
At the fire to warm 'twill do you no harm,
To drive the cold winter away.

11. When Christmas's tide come in like a bride
With holly and ivy clad,
Twelve days in the year much mirth and good cheer
In every household is had;
The country guise is then to devise
Some gambols of Christmas play,
Whereat the young men do best that they can
To drive the cold winter away.

12. When white-bearded frost hath threatened his worse,
And fallen from branch and briar,
Then time away calls from husbandry halls
And from the good countryman's fire,
Together to go, to plough and to sow
To get us both food and array,
And thus will content the time we have spend
To drive the cold winter away.

There are two MP3 recordings of the song at the English Broadside Ballad Archive: one from the Pepys Collection and one from the Roxburghe Collection.

There is a black letter copy of this song in the Pepysian Collection [see All Hail to the Days]. The first part is found in Durfey's Pills to Purge Melancholy. I have followed the text given in Rimbault's A Little Book of Songs and Ballads.

The words for this carol are a version of an early 17th century ballad. An original version can be found in a broadside collection under the heading 'A Pleasant Country new Ditty: Merrily shewing how to drive the cold winter away'. The tune by the same name can be found in John Playford's 1651 The English Dancing Master. There the tune is a lively jig to accompany a three part longways dance.

Editor's Note. Bullen is referring Tom Durfey (1653-1723). Many versions contain only the following verses: 1, 3, 7, 11, 12, or a combination thereof. The reference in verse 11 to 'Christmas-tide" generally refers to the Twelve Days of Christmas following Christmas Day through the feast of Epiphany, January 6; in some locations, the holiday may extend to Candlemas, February 2. Greg Lindahl's site has a facsimile of The English Dancing Master; it also contains a scan of Drive The Cold Winter Away.

"Drive The Cold Winter Away." This is the burden of a song in praise of Christmas, copies of which are in the Pepys (i. 186) and Roxburghe (i.24) Collections. It is entitled "A pleasant countrey new ditty: merrily shewing how to drive the cold winter away. To the tune of When Phœbus did rest,"3&c.,; black-letter, printed by H[enry] G[ossen]. It is one of those parodied in Andro Hart's Compendium of Godly Songs.

"The wind blawis cald, furious and bald,
This lang and mony a day;
But, Christ's mercy, we mon all die,
Or keep the cald wind away.
This wind sa keine, that I of meine,
It is the vyce of auld;
Our Faith is inclusit, and plainly abusit,
This wind he's blawin too cald," &c.
Scottish Poems of 16th Century, ii. 177, 8vo, 1801

The tune is in every edition of The Dancing Master; in Musick's Delight the Cithren, 1666; and in Walsh's Dancing Master; also in both editions of Pills to purge Melancholy, with an abbreviated copy of the words.

In the Roxburghe Collection, i. 518, is a ballad entitled "Hang pinching; or The good fellow's observation 'mongst a jovial crew, of them that hate flinching, but are always true blue. To the tune of Drive the cold winter away;" commencing--

"All you that lay claim to a good fellow's name
And yet do not prove yourselves so,
Give ear to this thing, the which I will sing,
Wherein I most plainly shew
With proof and good ground, those fellows profound,
That unto the alewives are true,
In drinking their drink, and playing their chink,
O such a good fellow's true blue."

Sometimes a tune named True blue is quoted, and perhaps from this ballad. It is subscribed W. B., and printed for Thomas Lambert, at the sign of the Horse Shoe, in Smithfield. Lambert was a printer of the reigns of James and Charles I.

In the Pepys Collection, i. 362, is another black-letter ballad, entitled “The father hath beguil’d the son: Or a wonderful tragedy which lately befell in Wiltshire, as many men know full well; to the tune of Drive the cold winter away;” beginning—

“I often have known, and experience hath shown,
That a spokesman bath wooed for himself,
And that one rich neighbour will, underhand, labour
To overthrow another with pelf,” &c. 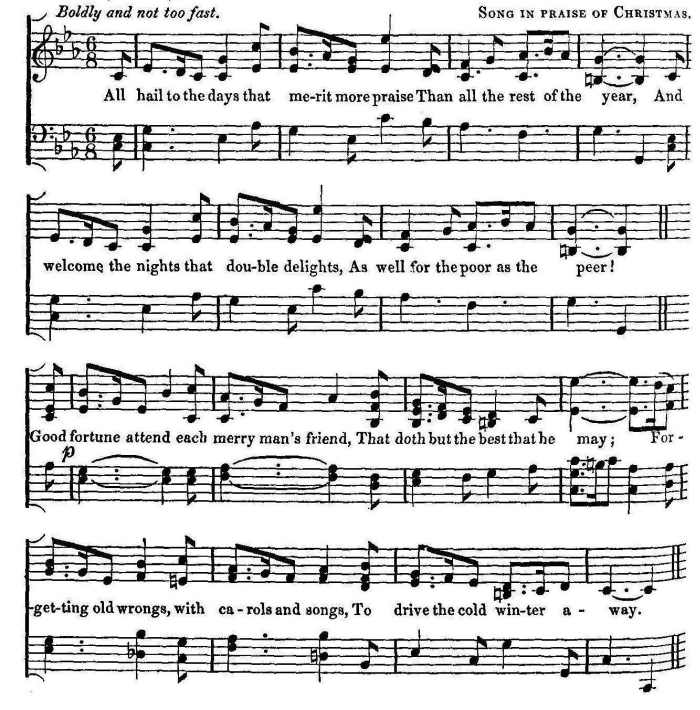 [Here, Chappell gives the same verses as from Bullen, above]

1. A song beginning "When Phœbus addrest his course to the West," which will be found in Merry Drollery Complete, Part ii. 1661; also in Wit and Drollery, Jovial Poems. The burden is, "O do no, do not kill me yet, for I am not prepared to die." By that name it is quoted in J. Starter's Boertigheden, quarto, Amsterdam, 1634, where the tune is also printed. Return

2. For the support and encouragement of the fishing towns in this time of Elizabeth, Wednesdays and Fridays were constantly observed as feast days, or days of abstinene from flesh. This was by the advice of her minister, Cecil; and by the vulgar it was generally called Cecil’s Fast. See Warburton’s and Blakeway’s notes In Boswell's edition of Shakespeare, x. 49 and 50. Return

3. Clim of the Clouqh means Clement of the Cleft. The name is derived from a noted archer, once famous in the north of England. See the old ballad, Adam Bell, Clim of the Clough, and William of Cloudesly, printed by Bp. Percy. A Clough is a sloping valley, breach, or Cleft, from the side of a hill, where trees or fruze usually grow. Return

Note: Footnote 3 from Chappell perhaps owes a debt to Dr. Edward Rimbault, who had this footnote in The Little Book of Songs and Ballads (1851), at verse 9, beginning "The shepherd, the swain, do highly distain," concerning the phrase in the third line "Clim of the Clough":

"Clim of the Clough means Clem (Clement) of the Cliff, a noted archer, once famous in the north of England. See the old Ballad, Adam Bell, Clum of the Clough, and William of Cloudesly, printed by Bp. [Bishop] Percy."

As Mr. Chappell observed, this carol is contained in both the Samuel Pepys Collection, Pepys 1.186-187 (Magdalene College, Cambridge) and Roxburghe Collection, Roxburghe 1.24-25 (the same Broadside is found in both collections). It can be seen on-line at the English Broadside Ballad Collection, University of California, Santa Barbara. On that site, you can see a transcribed text (All Hail to the Days; 12 verses from the Broadside), a scan of the Broadside (below), and two MP3 recordings of the song: one at Pepys and one at Roxburghe.

This excellent old Song is corrected from a black-letter copy, "Printed at London, by H[enry] G[osson]," in the Pepysian Collection. Another copy (of the First Part only) is in D'Urfey's Pills to Purge Melancholy. The black-letter copy is directed to be sung "to the tune of 'When Phoebus did Rest,'" (the burden of our song), may be found in Playford's Dancing Master, 1650. Many of the Cavalier Songs against the Rump Parliament were sung to this tune.

Rimbault's source was described (at page 206) as:

" ... from one of Thomas Britton's old music books ... in the editor's library, 'Printed for Tho. Vere, at the signe of the Angel without Newgate.'"

The sheet music to this song was reproduced by William Chappell in his Old English Popular Music, Volume 1. (London: Chappell & Co. and Macmillan & Co., 1893), p. 173:

On the preceding page, Chappell reproduces the tune "When Phoebus Addrest" which was also applied to this ballad in the Broadsides collected in the Pepys Collection (i. 186) and the Roxburghe Collection (i. 24).